We are two tenant associations who joined together to defend ourselves against a corporate real estate investment hydra that seeks to expel us from our homes in order to maximize their profits.

These are 2 photos a friend sent to me of our block on east 4th street in 1978. The building on the left with the 3 steps up is 118. The next one in is 120 East 4th. I moved in round this time and I recall the neighborhood having a feeling of Eastern Europe before the Wall came down. I think it had more charm, style, and culture back then. Quite a bit of personality and possibility. 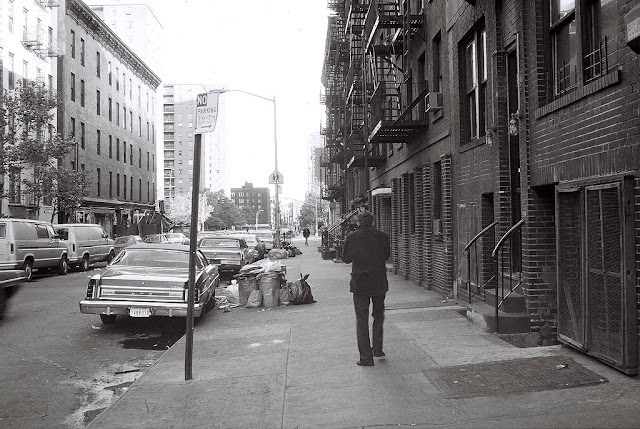 Check out the frame and wire coverings over the windows of the street level apartments. Those tenants kept chickens in there. They sometimes ran around in the back courtyard. Little mocha colored wild looking chickens. They often got loose and ran up the stairs. For some peculiar reason they terrified the 3 drag queen prostitutes that lived in #18. There were rumors of Santeria rituals run amok in the building. One thing I'll say for those chickens prowling the building, is that there were far fewer water bugs creeping about than there are now. The garbage was more neatly organized and tidy than it is currently. Just noticed that. I don't know who the dude is in the pic but he reminds me of that famous photo of James Dean, except in this scenario his back is to us and looks like he wants to get the hell away. 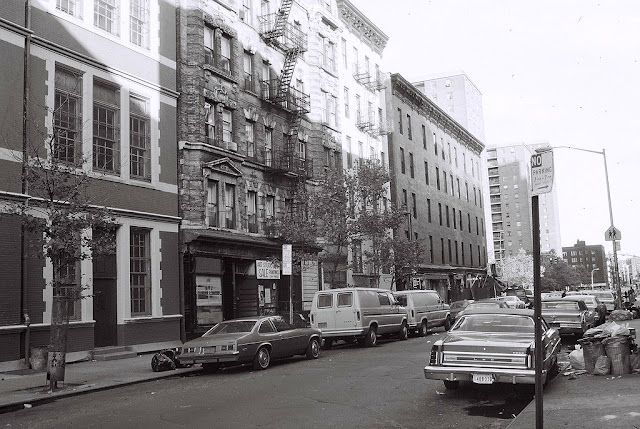 This is across the street. All I can say is damn, the design and shapes of the cars look so nice compared to the design of the cars of today. Now I'm not pining for the past. The now is great, but the current now is being whitewashed and the culture is fleeing the suburbanization of the city. The EV was like those cars back then. Now its sort of soft and blobby like car design today. Can't tell one car from another. No personality. I wouldn't mind the return of hard lines, color, and some of those wild mocha brown chickens too.... with today's technology and the internet.... Ugh! think of the possibilities.
Posted by East4thJane at 8:31 PM

Email ThisBlogThis!Share to TwitterShare to FacebookShare to Pinterest
Labels: Community